It's been a while since I've posted as I've only recently returned from my annual pilgrimage to Scilly. Unfortunately not recently enough as my 2 weeks coincided with what could be described as a rather quiet spell, more later.
I was originally due to fly off at 1641 last Saturday but with an impending storm, needing to be back at work on Monday and also the thought that I could get to Hayling Island for a certain small American plover I changed my flight to 0841. The plane was a little late but eventually we boarded. As the engines started up I thought I could hear a distinctive whining noise from my hand bag. Pulling out my pager I glanced at it and in horror read the words Scilly: White's Thrush St Agnes in the Parsonage. Here was one of my most wanted birds just a mile away and I was about to fly away from it. I briefly considered ripping off my seat belt and running to the exit screaming "let me off" but decided that might not go down to well for future flights on Skybus. On arrival at St Just I headed straight in to the terminal and asked if they could get me back to Scilly asap. The answer was "well if you'd like to wait we might get you back by lunchtime but we can't guarantee it and the weather is closing in". Weighing up my options I stuck with Plan A and reluctantly headed eastwards in a desolate mood not helped by a growing migraine. Popping paracetamol I made slow but steady progress in to Dorset impeded by half term holiday traffic and headed in to Hampshire in  deteriorating weather. I eventually reached Hayling Island at 2.30. Miraculously as I drove across the causeway my migraine cleared but my next problem was that I only had a UK road atlas and a pager message giving a postcode and grid reference to find the site. A direct call to RBA  (huge thanks guys) soon had me pulling up at the right place where I could see a distant line of birders huddled on the edge of an exposed spit.
I joined the line just as a heavy rain squall arrived driven in by blustery winds. The plover had not been seen and the conditions at that moment were appalling. The rain eased a little, though not the wind, and I moved position in the line to get a better view of the gathering waders on the sand spit, and also found a friendly face in the crowd in the form of John M.
It was time to start scanning the flock, hood up and hunched over my scope to shelter the eyepiece from the rain and left hand firmly on top of my scope to counter the vibration from the wind. I scanned the flock of waders, Ringed Plovers, Dunlin and Sanderling, repeatedly from left to right and back again. The flock continually shifted with small groups of birds taking off and landing in a different position and others flying in from further back. For 45 minutes or so it was just Ringed Plover, Ringed Plover, Ringed Plover but then Ringed Plover, Ringed Plover, hmmmmm....... In to my scope, although right at the back, appeared a distinctly small plover. My knowledge of Semi-p Plover ID was not great, my research on Scilly having been limited to a quick glance at a photo of this bird on someones laptop and a read of the Collins field guide. At the distance and in the conditions this bird was showing at,  plumage features were hard to see but what I remembered from the photo was the size difference and how cute the Semi-P plover looked compared to its neighbouring Ringed Plovers. The bird in front of me was small and definitely cuter looking than the Ringed Plover it stood next to, and just looked different. This was good old-fashioned jizz birding at its best.
I turned to my companion and asked how good his ID skills were. The answer was "well I've see the photo" followed by "why, have you got something interesting?" It turned out that he too had picked out and was pondering on the same bird and it was also apparent that some birders to our left were also getting excited about something. John went over to enquire and came back saying "it's the one that's running around". Sure enough, my bird had at that time been running around and was indeed the Semi-palmated Plover, a huge relief. As the news spread along the line it was good to be one of those giving directions to other anxious birders and not the one panicking as you desperately try to pick a bird out before it potentially disappears. It was also a day when having invested in a good scope with an excellent zoom also paid off as the light was murky to say the least. The plover obligingly came closer and closer, and eventually was almost the nearest bird of all of them, giving surprisingly good views allowing its plumage features to be seen too. After a good length of time enjoying the bird the entire flock took flight and even then the plovers small size stood out as the flock whirled past us.
It was time to head home and I discovered how cold and tired I was. The effort of keeping my scope still left my hands struggling to undo the clips on my tripod legs but as I walked back to my car a warm glow of satisfaction grew inside. My first new bird of 2013 and what a cracker it was! My tick drought was over.
Posted by Unknown at 22:46 No comments:

Last night, browsing through Twitter, my attention was grabbed by a tweet from @andymus1 suggesting that it would be a good night to try and catch a Merveille Du Jour. Splendidly named and beautiful in appearance this is a moth I've always wanted to see so following his advice out went the trap. Fortuitously I checked the Norfolk Moths website to see if they occur in my area (which they do) but noted their comment "Infamous for sitting just outside of the trap at dawn, rather than in it". Fortunately dawn at this time of year is at a relatively reasonable time so at 7am as the sun was rising I wandered out in to the back garden in my dressing gown and wellies and scanned the grass around the trap. My gaze was first caught by the bright crimson of a Garden Tiger, a moth more of high summer than mid-autumn: 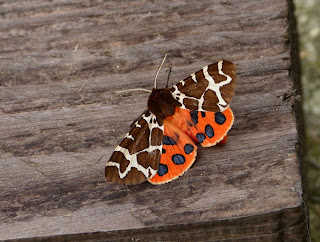 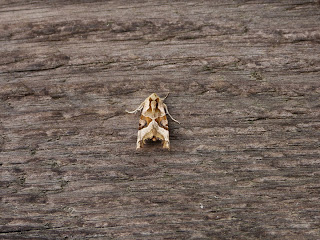 And then, almost unbelievably but unmistakeably, the mythical beast itself, a Merveille Du Jour (literally wonder of the day) perched in the grass by the trap just as Norfolk Moths said it would be. It is indeed a beautiful moth in the flesh, intricate black and white patterns on a lime-green background with black and white striped legs. 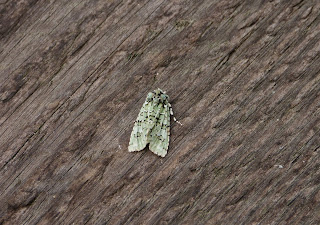 The trap itself had accumulated a good collection of Daddy Long-legs and caddis flies but also a selection of moths typical for the time of year, lots of Beaded Chestnuts, Large Wainscots, Lunar Underwing and Large Yellow Underwings but also this splendid Green-brindled Crescent: 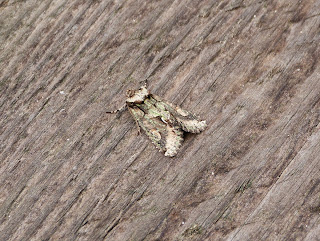 And the grey but exquisitely patterned Blair's Shoulder-knot: 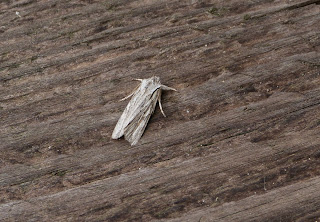 With others such as Pink-barred Sallow, Red-line Quaker and White-point I managed a total of 27 species of moths, not a bad haul for a Tweet.
As I was collecting the trap a single Brambling had flown over but this initial promise of migrants failed to deliver anything further. Hopeful for a patch Firecrest (there seemed to be a mini-invasion just a few miles away) I only managed to see 2 Green Sandpipers on the scrape. Bird experience of the day came from a Grey Heron which I spotted poised in stalking mode away from its usual favoured watery habitat. As I watched, intrigued to see what its quarry would be, it suddenly lunged forward and then lifted its head with a squirming mole in its beak. Constantly juggling the mole, it walked to the nearest dyke and dunked the unfortunate creature several times into the water although never for long enough to do anymore than rinse it. Eventually the mole went limp and was duly swallowed, a good but probably unusual meal for the Heron.
Posted by Unknown at 23:18 No comments: