At last I had time today to make the short trip in to Lowestoft to look for the Dusky Warbler. We started lambing again 9 days ago so I spent last weekend hovering around the lambing field. Typically hardly anything lambed but I did at least catch up on various jobs around the garden and was in the right place when a Kingfisher rocketed up the dyke at the end of the garden, a Patchwork Challenge year tick.
It was quiet again in the lambing field this morning and younger daughter wanted me out of the way to prepare a Mothers Day surprise giving me the perfect excuse for a visit to the Dusky.
I arrived on site at noon to find the bird hadn't been seen for 3 hours or so, when it had last been seen in a line of scrubby willows that stretched 100 yards or so back from the path. There was a small group of 4 other birders looking and after half an hour or so we heard it tacking softly somewhere in front of us. It was an hour before it was finally spotted creeping around in a tangle of willow branches and sedge low to the ground but the views were distant and into the sun. Moving closer down an obvious well worn path to a fence line, the by now just 3 remaining birders quickly got much better views of the Dusky as it reappeared in the same area and moved up higher in to the willows before flitting even closer in to an isolated bush and then on to bushes lining the main path. It was calling frequently making it easy to locate. Here I had another brief though excellent view of it as it came towards me right by the side of the path. It quickly flew in to the reed bed on the opposite side to where it had come from and disappeared.
Walking back along Fisher Row, Brimstone, Peacock and Small Tortoiseshell butterflies were out in force and a familiar song revealed my first Blackcap of the year.
Back home, the ewes were sunbathing and I was banned from the kitchen by younger daughter for a further half hour. Judging by the dusting of icing sugar on the work surface, the unwashed cake tins and the recipe for butter icing open on the computer screen it looks like I'm getting a cake tomorrow.
Out on the marshes here, we still have 3 pairs of Lapwing, one pair of Redshank and a pair of Oystercatchers and the Marsh harriers, 3 pairs at least, have been displaying.
Posted by Unknown at 19:46 No comments:

New bird for the scrape

Spring and the lovely spring-like weather continues apace and today it was time to retrieve last years lambs, now known as shearlings if they're Southdowns, tugs if they're Romneys or hoggets if they go to market, from their wintering quarters. First job was to worm and move the 2 rams, Colin and Bradley, from the marsh they were on, an easy task which also gave time to have a good look at our scrape. The Lapwings were still in residence and still displaying. They've been joined by 3 Oystercatchers and now 2 Redshanks feeding along the muddy edge, all annual summering visitors to the area. Dropping the water level has really brought the scrape to life and we are privileged to have the ringing sounds of  wader calls as a background to work outdoors.
Getting the shearlings out to their allotted marsh was a harder task as they were more keen on renewing acquaintance with 3 other young sheep I had brought in at the start of February for shearing in preparation for the summer shows. Eventually they reached their destination and it was time for another look at the scrape. A Snipe had joined the Redshanks and then I noticed a small wader, a Dunlin, wow! OK, so its only one Dunlin, hardly something to get excited about most would say, but it was the first since the neighbours once arable fields flooded one winter many years ago and it also suggests the scrape is attractive to passing migrant waders. Spring passage could be interesting I hope.
Later this afternoon, Fieldfares and Redwings were moving along the valley edge and this evening more new birds, a pair of Shoveler, were feeding on the scrape. Birds seem to be on the move.
Posted by Unknown at 20:37 No comments:

My Patchwork Challenge has been somewhat lacklustre this year. February was terribly slow with just 4 new birds added and I didn't expect a lot from March. Forced to stay home on Sunday due to my role as Mummy taxi for my elder daughter and German exchange student gave me plenty of time for some Patchworking. The weather was gorgeous, clear blue sky and warmth enough for just shirt sleeves. The garden had burst in to life with Small Tortoiseshell and Brimstone butterflies, and newly emerged bumblebees re-stocking on nectar on the Red Dead-nettle flowers in the vegetable garden. Marsh Harriers were doing their looping display flight and on the scrape marsh, the Lapwings were still fending off potential nest predators and the first Patchwork tick of March appeared as a noisy Oystercatcher flew in.
Encouraged, I headed off with the dog for a Sunday stroll down the road to the northern limit of the patch. Here a rustle in the dry leaves at the edge of the path alerted me to a Grass Snake slithering away, disturbed from its sun-bathing. I can't recall seeing one so early before. Emerging from a line of trees by the marsh, two more Oystercatchers started alarming and I glanced up to see a harrier coming in to view. Except this wasn't the usual ubiquitous Marsh Harrier, the different profile, the barring on the underside of the wings and the white rump made this a Hen Harrier, my first for the year. I had been thinking I wasn't going to catch up with one of these birds on patch this year. My return towards home also produced 2 Chiffchaffs in the same bush.
Today was my half day, so after doing some long overdue weeding in the vegetable garden (but leaving those Dead-nettles) I headed off around the marsh. Another patch year tick came in the dowdy shape of a returning Coot in its usual dyke. I took a diversion on to the neighbours rushy marsh in the hope of a Water Pipit but almost immediately flushed a Jack Snipe that erupted from near my feet and flopped half-heartedly across the rushes before disappearing in to the dense vegetation. The day was going well! Nearing the end of my circuit, a small group of gulls came towards me heading up the valley. A jet black hood on one caught my eye which with the blood red bill, white eyebrows and clear white wingtips revealed it to be a superb adult Med Gull. Despite the Med Gull capital,Great Yarmouth, being only 8 miles away, this was my first on the patch since 1998. Obviously we've not got enough chips (Med Gulls favourite food in east Norfolk) on the marsh. So, a great end to the day and excellent Patchbirding !
Posted by Unknown at 22:10 No comments:

The 1st of March is regarded as the start of the meteorological spring but others prefer to take the Spring Equinox as their starting point. I'm optimistic and  like to follow the Met Office on this. Once February has been and gone I think winter is over. If we get any snow it rarely persists, the sun is too strong and the days too long for the snow not to melt quickly. There's also the fact of the sun rising before me so I'm feeding the sheep before work in full daylight at last. This year Spring hasn't let me down and if anything has arrived early. Daffodils are bursting in to bloom, buds are swelling on the hedgerows and the rooks are busy carrying sticks to their growing nests. White blossom is already smothering the branches of the Blackthorns, there is a chorus of bird song on sunny mornings and flag irises are growing rapidly in the damp woodland. Spring is well underway. 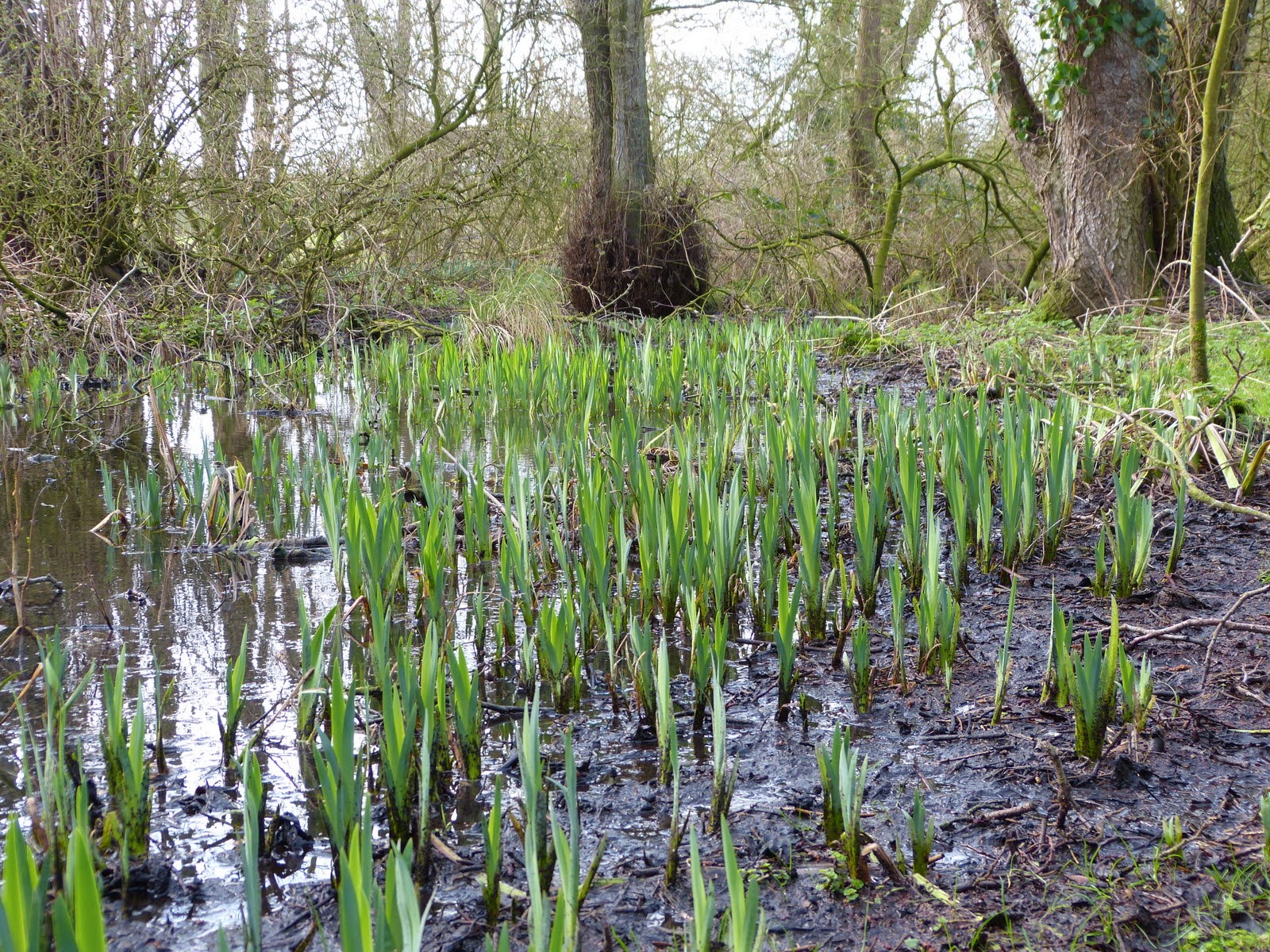 Of course, winter often fights back. I went to Minsmere last Sunday afternoon where under a sullen grey sky, a strong cold southerly wind made the walk from North Bank down to the South Levels quite an effort. The birds too had a strong winter feel to them with hundreds of ducks including 3 Smew on the Scrape and few waders. I missed the Spoonbill that had visited earlier. The principal reason for my visit was to watch the Starling roost in the Minsmere reedbeds. Island Mere hide was standing room only but the Starlings put on a spectacular display of close formation flying, forming a whirling, rollercoaster amoeba that rolled and flashed across the reeds in the gathering gloomy dusk. 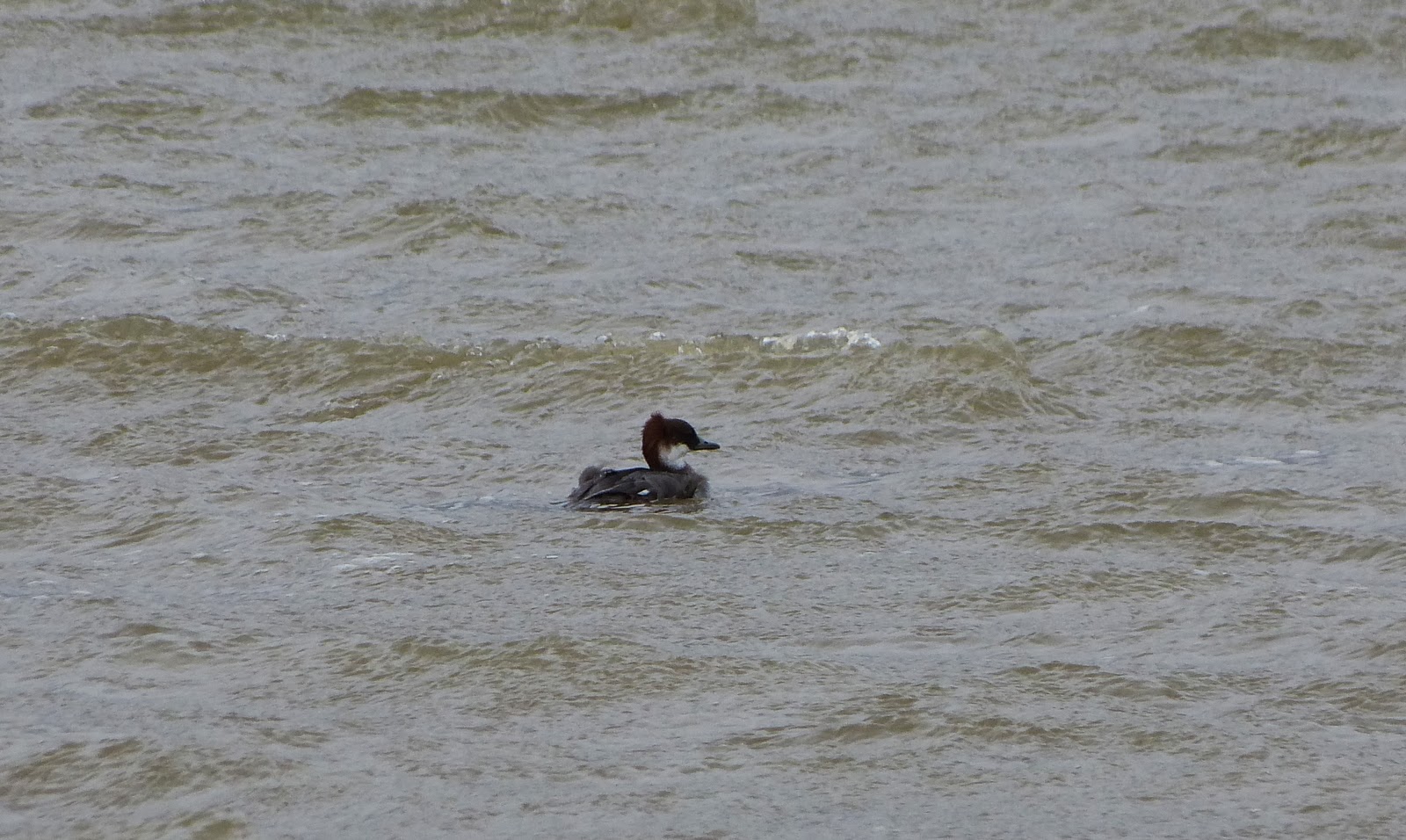 The spring and sunshine returned on Monday just in time for the working week. We dropped the water level on our scrape 2 weeks ago exposing a muddy margin. The Teal seem to prefer it this way and many have moved out of the Alder wood to dabble in the shallower water. Small parties of Lapwing have been moving through and yesterday I was delighted to see Lapwing displaying on the scrape marsh. Today 6 Lapwing were on this marsh and a low-flying Buzzard caused an instant aggressive response from one of the birds who continued his tumbling display flight for several minutes after the Buzzard had passed. The Marsh Harriers too have been showing signs of breeding behaviour. Reed Bunting numbers have been building up on the garden feeders as seems to happen each year as spring progresses, reaching a peak of 9, many in full summer plumage already. A stunning spring plumaged male Lesser Redpoll this morning was also a first for the niger seed feeder this year. Over it all, the classic soundtrack of spring and early summer here, the busy sound of the rooks in their rookery plays constantly. All we need now are some summer migrants.
Posted by Unknown at 20:26 No comments: