After Saturday dashing around the Suffolk countryside Sunday was a stay at home day. The lambs and March lambing ewes needed vaccinating which meant gathering in 3 groups of sheep all in different places. It was another cold wintery day with a biting easterly wind. I started with the lambs near to the house. As I finished weighing, worming and jabbing them I noticed a group of Moorhens in the chicken paddock looking anxious and spotted a stoat working its way along the hedge bordering the dyke. It stayed out in the open for the full 25m giving excellent views. Meanwhile a Great Spotted Woodpecker was drummimg in the alder wood in hopeful anticpation of spring. The Rooks, however, paid just a brief visit to their rookery and the large flock of Siskin and Redpoll was still zipping noisily about between alder clumps.
It was afternoon before I got out onto the marsh to round up the last group of sheep. There was a single Lapwing on one of our marshes. In the past week I had noticed other singles and pairs of Lapwings scattered across the marshes. Are these prospective breeders checking out territories? Maybe spring is on its way.
The Teal seem to have moved out of the wood on to the marsh to feed (presumably having exhausted the food in the woods?) and the drakes appeared to be playing close attention to the females. Other birds of note were a Green Woodpecker and just one Marsh Harrier
Posted by Unknown at 19:19 No comments:

I had to work this morning so it wasn't until mid afternoon that I made it to the Great Grey Shrike at Wrentham. There had been no sign of the bird for half an hour when I arrived. It had last been seen flying into a Christmas tree plantation so I wandered down the road to try and view the plantation from the other side but was thwarted by a thick high hedge which gave limited viewing. Walking back I was surprised to see a Woodcock fly close by over the road, flushed from an adjacent field by agricultural activities.
With the shrike seemingly disappeared and several birders reporting seeing Hawfinch today at nearby Sotterley I drove the few miles to Sotterley to try my luck. I reasoned that as it was only 10 minutes away I could quickly head back if the shrike reappeared. I didn't realise how quick my return would be. Parking at Sotterley I checked my pager to only to find the shrike reported again so without even getting out of the car I about turned and headed back ( a little faster than my outward journey I have to admit) to Wrentham.
The shrike had dived back into the plantation but within seconds its distinctive shape erupted skywards and into the top of a tall tree. It posed beautifully if a little distantly for several minutes despite the onset of a snowstorm before dropping down into cover again.
My return to Sotterley was less fruitful with no sign of the Hawfinch although it was rather late in the day. At least the Nuthatches were performing well as usual.
The patch has been quiet the past week with no new birds and fewer common ones. The weather has been bitterly cold and dull, and spring is feeling a long way off again. Last year the rooks started nest building on 16th February but their morning visits have been brief the last few days and I assume they've returned to Buckenham to roost as there's been no sound of them in the evening. Something has to happen soon.

This morning a quick scan of the marshes as I was getting changed for work gave me another Patchwork tick. I don't think I've been quite so excited about Canada Goose since I was a child in my local park!
The sun came out today so at lunchtime I managed to escape from work and head into the Broads to look for the wild swan flock in the Catfield area. They were easily located on a back road between Ludham and Catfield close to the A149. I took a few photos with my Panasonic Lumix but Peter Ransome with a proper camera turned up shortly after me so if you want to see better photos I suggest you check out his blog here. 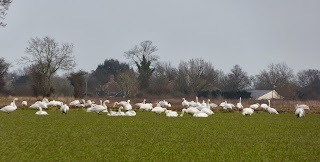 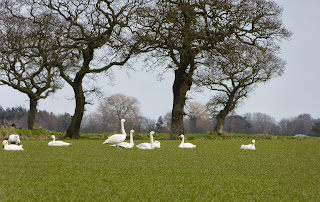 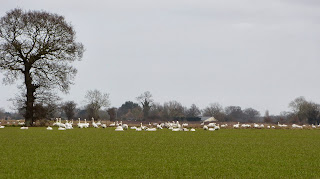 The rooks have been at their rookery every morning this week and were back late afternoon but as dusk fell they disapperaed. However instead of going to Buckenham, from the noise just along the valley, they had just nipped along to the rookery behing Thorpe Hall to roost. It can't be long before they start building their nests for 2013.

The first Patchwork Challenge results tables are out hereso I have to bask in what will be a brief moment of glory as top of the percentage table for the Inland East Anglia league. I'm a little surprised to be at 75% of my points total after just one month but its fairly easily explained. As I live in the middle of my patch I'm birding it most of the time I'm there whether I'm feeding the sheep, doing the gardening or simply getting dressed in the morning. The result is I've seen almost all of the resident species and most of the regularly occurring winter visitors too.
It can only go downhill from here. There'll be a boost when the summer visitors arrive but then it will be a struggle for the rest of the year. I'll be relying mostly on flyovers and hoping a few passage migrants can make it this far inland. It would help if the next door neighbour would open up and freshen up his now overgrown scrapes which once gave us spoonbill, garganey, wood sandpiper, glaucous gull and breeding avocet from the bedroom window. Or we could always dig our own.......
Posted by Unknown at 21:26 No comments:

A tale of two seasons

This weekend Saturday and Sunday were like chalk and cheese. The sun came out yesterday and in the windless conditions it felt almost spring-like especially with snowdrops and hazel catkins out in the garden. 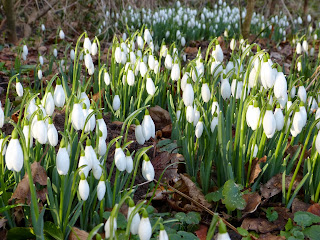 I believe snowdrops are not strictly native but who cares? They are always a sure sign to me that spring is definitely on the way, shrugging off snow and ice in defiance of winter. The catkins too ignore the cold temperatures. 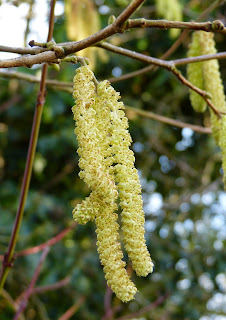 I ignored news of a Green-winged Teal at Breydon thinking I would look for that on Sunday and instead concentrated on tasks in and around the house. I retrieved the trail camera from the now disappeared staked out rabbit flushing the first Gadwall of the year from one of the dykes in the process. The camera revealed the only beneficiaries of the rabbit to be a rat and a Great Black-backed Gull. Humph. I also planted out strawberry plants in the vegetable garden to the sound of the Rooks chatting away to each other in their rookery, another sign of impending spring.
In the afternoon I took the dog for a walk up the road to investigate a different corner of my Patchwork Challenge patch and patch ticked House Sparrow and Little Owl. House Sparrows are rarities in my garden despite seemingly ideal conditions with 11 different bird feeders, livestock and chickens. We get about one record a year which always triggers a rush for the binoculars. Other than that there was little new.
Today was utterly different and felt like the depths of winter again. The rooks stayed away from their rookery this morning. I went to Breydon as planned but how I wished I had gone yesterday. There was a bitter, raw strong southerly(!) wind blowing and the light was appalling. Everything was a flat grey. I was too late for the Green-winged Teal which had been seen only briefly early on in the morning although I searched through the otherwise spectacularly large flocks of Wigeon and Teal for about an hour before the cold drove me home. There must have been about 10000 Wigeon and 1000s of other birds all flocking together in vast groups making the hunt for the Teal very difficult indeed. Highlights were big flocks of Black-tailed Godwit (c1000?), Lapwing and Golden Plover, with some Pintail, Barwits, Grey Plover, Knot, Dunlin and a few Sanderling.
Back at home I ventured outside again in the afternoon to feed the sheep. I startled a male Sparrowhawk out of the hedge which flew off across the sheep paddock clutching a dead Blackbird before dropping it on to the turf. I checked the slightly gruesome carcase for rings but found none. After feeding the sheep I noticed one of the ewes taking an interest in the body too. When I investigated she had bitten off and eaten one of the Blackbirds feet!
Posted by Unknown at 19:26 No comments:

The snow may have gone but the cold has returned with a vengeance, or so it felt this weekend.
Yesterday got off to a good start with some sunshine and a Lesser Black-backed Gull, a patchwork year tick. There were a few sharp showers but these had all been short-lived so I headed off for Haddiscoe Island in the afternoon with the dog. The first thing I noticed was the wind, an icy northerly coming straight down the New Cut towards me. Then the rain came, blowing straight in to my face and this time it didn't seem to want to stop. I walked the first mile with my head down until it finally relented. The dog was surprisingly unconcerned.
Perhaps because of the wind and rain the Island seemed strangely quiet, just the odd Marsh Harrier and Barn Owl to start with. The thick cloud making the light very poor didn't help but I stuck it out until the cloud cleared and the sun came out. With better light I scanned towards Reedham and picked out a raptor in flight, a Rough-legged Buzzard. It began hovering and continued for about 10-15 minutes dropping down only twice in that time. It was just a shame the views were rather distant. The dog was now shivering despite her coat so it was time to head home.
Today the wind was even colder or so it felt. I stayed at home as I'm getting over yet another cold but the patchwork ticks keep coming. Late morning I was scanning across the marshes when a distant raptor caught my eye. Expecting a Marsh Harrier I was delighted to see the forked tail of a Red Kite, a bird I didn't see here in 2012. It flew across the marshes towards us before disappearing out of view behind the neighbours wood. Incidentally I have at last staked out a dead road-kill rabbit on the marsh to see if it will attract raptors in to feed but not even the crows have found it yet and this Red Kite completely missed it too.
The other highlight was a mixed flock of 100 Siskins and Redpolls feeding in the alders by one of the sheep paddocks, the biggest flock I've seen here for some time.
Posted by Unknown at 21:36 No comments: